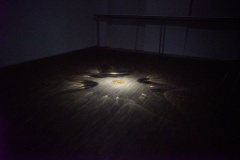 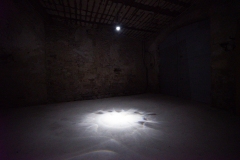 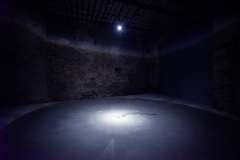 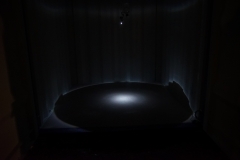 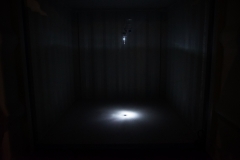 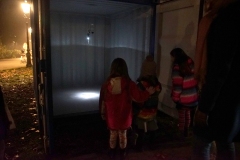 The equipment with the light source will be hanged from the ceiling in the center of the perfect darkroom. The equipment consists of a super bright LED, heat sink and thin water pipe. Visitors will enter a dark room and see a water drops dripping from the center of the room. The water droplet works as a lens in which the refractive index keeps changing and draws patterns on the floor, walls, and ceiling. Patterns keep changing slightly, and the identical pattern will never emerge. Infinite light patterns are projected by two physics, the surface tension of water and gravity. Water droplets also work as a prism, and rainbows appear on the walls. The sound of water droplets falling also makes you aware of “MA”. The audience could reconsider the structure and meaning of this world by the simplest relationship of time, space, and light which are the fundamental element of this universe.

The idea of this work is based on the ” Shishi‐odoshi” (scare deer) which is an object in a Japanese garden. It is a device made of bamboo. It tilts as the water fills up and makes a sound when it hits the stone on the ground. Although it was originally used to scare away the animals, the Japanese found aesthetics there, “MA”(space). If there is no sound, people forget that they are in silence. If there are sounds, people can feel silence between the sounds. Paradoxically, this is a device that we can feel silenced by sounds. Finding beauty between things is a concept of Japanese aesthetics. In this work, I converted this sound into light. There is darkness between a bright moment. People will recognize the light by darkness, darkness by light.
Light is the most standard phenomenon in this universe. Space and time are defined by light. This work represents the relationship between basic elements of this universe, time and space by light in the most simple way by using only two physics, the surface tension of water and gravity. It is only a small part of this universe that our perception, thought, and imagination can capture. This work abstracts all of the worlds that we can capture, time, space, and light, and furthermore, the interval is represented. The consciousness of “MA” will be a hint to reach the deeper figure of this world.
To make the contrast to modern days when things are overflowing. To release the art from an individual imagination by producing using nature’s providence. To obtain infinite time resolution and infinite spatial resolution by creating an analog way. 0.04ml is the volume of one water droplet.